is an original townhouse in a dreamlike pedestrian ally of the barrio Santa Cruz in Old Town Alicante with magnificent views over the city and the Mediterranean Sea and with beach, shops, restaurants, nightlife and sightseeing within 5 minutes’ walk.

The Townhouse is equiped with every convenience for your comfortable stay and the Cave Guest Appartment is a romantic gem.

Santa Cruz is a neighborhood full of joy, life and visitors. Tourists mingle with neighbors and are always welcome. It is a friendly place of an extraordinary beauty. You will find bars and restaurants where you can relax and enjoy typical tapas and wines from Alicante.

Another point of interest within the area is the Santa Cruz Hermitage, dating from the 18th century. This religious building was erected on one of the few remains left of the old medieval murals of the city, specifically on the Tower of the Ampolla. It is from this chapel the procession of Santa Cruz begins its journey every year on Ash Wednesday in the Holy Week. It is one of the most famous procession of all those held in Alicante and Spain.

The privileged position of Villa Ana Maria compensate the stairs and slopes you need to climb. Here in Santa Cruz, you can relax from the crowds down in the old town and still find yourself only a stone's throw away from everything. 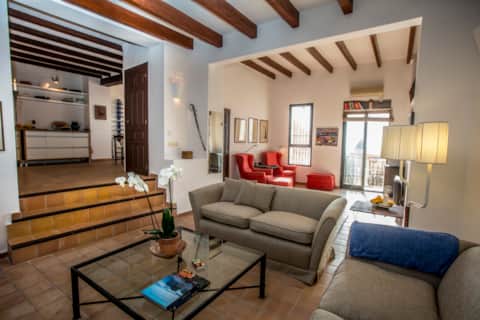 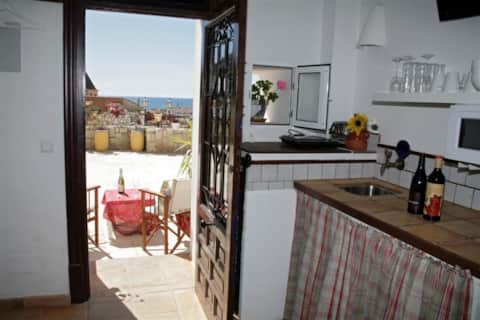 Let yourself be surprised by a different Holy Week. Did you know that the Santa Cruz neighborhood celebrates a unique and centennial procession?

The Hermitage of Santa Cruz dates from the S. XVIII. It was built on the tower of the Ampolla, one of the few remains of the medieval walls. Inside this is the image of Christ, which is used in Holy Week in the parade of the procession.

This Alicante neighborhood is located at the foothills of Santa Bárbara Castle. It has a strategic location a little away from the city, but easily accessible from the old town of Alicante. It is a very unique, colorful and original neighborhood, which can be reminiscent of a typical Andalusian neighborhood. Hence, the curiosity of the Holy Week procession.

Every year on Holy Wednesday, the Brotherhood of the Holy Cross parades through this neighborhood of narrow streets, steep stairs and corners with charm, which make this celebration a unique event.

At dusk the procession leaves the Hermitage, which is located in the highest part of the neighborhood, and goes down with great effort down the steep streets and stairs.

There are four different steps, Cristo Cautivo (a copy of Medinaceli’s), Christ of the Faith, Virgen de los Dolores (since 1994 carried only by costaleros) and El Descendimiento.

The multitudinous procession returns at dawn to the top of the Hermitage to the race, another particularity that makes this act different, since it makes difficult the ascent of the steps.

On the facades of some houses you can see handcrafted tiles, with handwritten phrases, which allude to the neighborhood and this important festivity. These verses extol the particularities of this beautiful place and encourage the bearers and visitors to overcome the obstacles of the course, because in the end the effort has its reward!

Since this procession has become a cultural spectacle, we recommend that you plan your visit with time. It is important to arrive early at the neighborhood of Santa Cruz to give you time to take good site, and even go up to the hermitage and see the preparation of the steps. If you have extra time, we recommend that you visit the entire neighborhood, taking advantage of a drink in its charming terraces. You can access spectacular views of the city and the sea from many places in this peculiar neighborhood!

The ‘Fiesta de las Cruces de Mayo’, the Festivity of the Crosses of the Month of May, is part of one of the most beautiful popular festivals in Spain. It is held in the Santa Cruz district of Alicante, a picturesque place that puts its party clothes on to welcome these special fiestas.

For the festival, the streets fill up with flowers and colourful decorative elements. In addition, there is room for all kinds of fun and joyful activities for everyone during these days, from children's games to popular food via parades and costume contests.

The origin Festivity of the Crosses of the Month of May

The Festivity of the Crosses of the Month of May takes place between April and May. It happens in the Santa Cruz neighbourhood, where there is a very warm atmosphere full of colour and crosses with carnations.

Its origins are based on a popular legend that speaks of Constantine I, the Great. According to the story, this character reigned for a few years and before facing the barbarians he had a kind of vision based on a very bright cross whose inscription read "with this sign, you will win".

Constantine had it built and managed to defeat the barbarians. After this episode, he became a Christian and sought the Cross of Christ. On Mount Calvary, his mother discovered several crosses and, to distinguish the real ones from the false, placed them on the sick who found relief by touching the true cross of Christ.

During the Festivity of the Crosses of the Month of May, a series of special events and activities are held in Alicante. On the first day, for example, there is a presentation of the queens and the opening speech of the festival, and after that other festive events take place: open-air concerts and dances, parades with musical groups, original costume contests, traditional games and snacks, ‘Rocío Mass’ and musical performances. 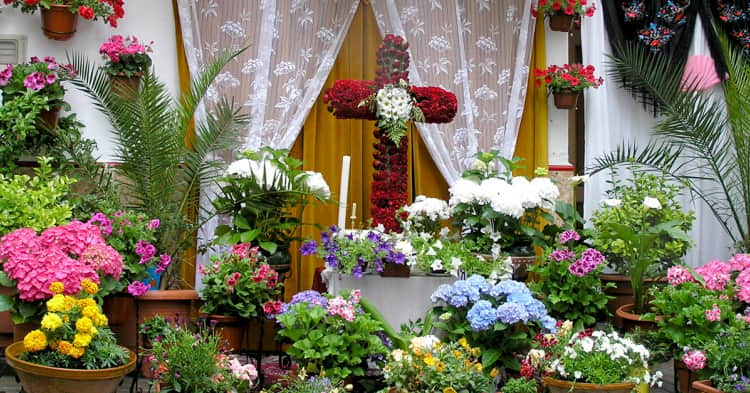 The Pilgrimage of Santa Faz

There is an annual event that people from Alicante do not want to miss. A day marked in red in the calendar and to which we all look forward with excitement. We are talking about the Pilgrimage of the Holy Face (Santa Faz), which is celebrated every year the second Thursday after Easter. More than 300,000 people from all parts of the province participate in this tradition, whose origins come from five centuries ago. If you are in town these days, you can not miss it! And if you want to participate in the pilgrimage, this is what you have to know.

The procession starts at 7:00 a.m. from the Cathedral of San Nicolás and Plaza del Ayuntamiento, just a few minutes walking from Villa Ana Maria. We recommend that you get up early to catch one of the rosemary canes that are distributed free of charge. The pilgrims dress in their traditional black blouses and a scarf around their necks with the colors of the city: white and sky blue.

During the walk, the Santa Faz pilgrim will be tempted by the classical “paraetas” (a stop on the road where many stands offer the pilgrims food and drinks) and where we recommend you to enjoy a roll of anise with a good glass of the local sweet wine, called “mistela”. These are two ingredients every pilgrim must taste to recharge energy for the rest of the road.

The walk from the Cathedral of San Nicolás to the Monastery is 7,5 km and lasts about two hours.

The tradition is to spend the day in the surroundings of the monastery, eat with family and friends and shop around the craft stalls that are located there all the weekend. We recommend you to buy a souvenir of the Santa Faz, there is not a gift more traditional from Alicante than this one!

History of the Santa Faz Pilgrimage

As we have already explained, the pilgrimage is a tradition from Alicante that is almost 500 years old. The origin dates back to the 15th century, when the then priest of San Juan, Mosén Pedro Mena, received in Rome a venerated canvas of the face of Christ from Jesusalem, as a gift. This religious relic is a piece of cloth used by Veronica to wipe the face of Jesus as he carried his cross, according to the catholic history.

The first documented pilgrimage was celebrated on Friday, March 17, 1489. Alicante suffered a terrible drought, and thousands of citizens went out in pilgrimage with the relic to ask for water and prosperity for the crops. The documented stories of that day tell that the religious P. Villafranca, who transported the canvas during the journey, was paralyzed at a moment of the pilgrimage, feeling like a great weight that prevented him from walking. Those who accompanied him said they saw a tear coming out of the right eye of the Holy Face cloth. It started to rain in Alicante, and since then, the tradition is been kept alive.

The events of the pilgrimage reached the ears of the King and spread throughout Spain. A year later, the first monastery was built, Pope Innocent VIII granted indulgences and Fernando II of Aragon granted the title of City to Alicante. In 1496, King Ferdinand the Catholic, approved the confraternity of St. Veronica, and in 1525, Pope Clement VII approved the Office and Mass of the Holy Face, and gave validity to the miracles that had taken place. 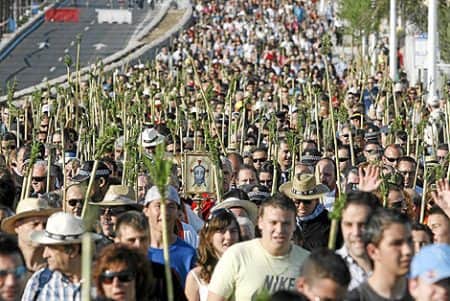 Book Now
Loading...
Upps!
You're running a web browser we don't fully support. Please upgrade it for a better experience.
Our site works best with Google Chrome.
How to upgrade the browser